The Coffs Harbour Men’s Shed Inc. has enjoyed a very successful 2018-2019 and I would like to sincerely thank all the members of the management committee for their contribution and great support. Without a strong committee, the shed can’t function.
By far the most notable achievement being the outstanding official opening on 3rd May with the unveiling of the commemorative plaque by the Mayor, Denise Knight. The opening was made possible when we finally received the building certificate in December 2018. Thanks must also go to the Gala Opening committee who brought it all together for a very successful day – thanks to Clive Longstaff, Ken Howe, Tony Winter and John Gregory who assisted me with the event.
2019 saw the introduction of a monthly garage sale and to date has been a great success thanks mainly to Doug Tysoe and a few shed stalwarts volunteering their Saturday morning. The revenue generated has been a bonus for the shed.
The shed has hosted several visits from the Coffs Harbour Pacific City Lioness Club, hosted a dinner for the Sawtell Rotary Club and in March we hosted a BBQ for all sheds in the region. We have had morning tea presentations by various organisations including NSW Police, NSW Ambulance, NSW Health Rural Mental Health, Podiatrist and emotional and stress discussions. Thanks to Ken Howe for arranging these presentations.
Several members have formed a band called the “Shed Men” and obviously enjoy themselves while playing. The band performed at the official opening and were well received. They also played a few numbers for the shed during Men’s Shed Week in September.
Some of our very talented cabinet makers/carpenters/metal workers have produced some brilliant work and has been very much appreciated by the community who have had projects completed by them.
In May 2019 five members were successful in completing first aid training which included CPR and AED training as well as basic emergency life support.
During the year the shed has benefitted from the installation of a Pin Router donated by member Barry Guest, purchase of a new table saw, a long belt sander donated by North Coast Doors, re-location of two air compressors including the installation of air lines feeding both sides of the shed with compressed air and fully ducted air conditioning to the mezzanine area. Major projects underway are the installation of a fully ducted dust extraction system and the upgrading of the mezzanine to a habitable area in line with our 2 year Strategic Plan.
We have catered for Bunnings BBQ’s including their Father’s Day family night and also catered for Boambee East IGA’s family day.
During 2019 I did presentations to Boambee East Seniors, Coffs Harbour View Club, Sawtell Rotary, Coffs Harbour Pacific City Lioness Club and Legacy. These have been invaluable in helping promote the men’s shed.
I would also like to acknowledge the generous donations we have received in 2019 form the Park Beach Bowls Club, Commonwealth Bank Park Beach Plaza, Nan and Les Cowling, Warren Skinner/Rotary and McGrath Real Estate through their Community Give Back Program.
Another innovation has been the group outings where several members attended the Slim Dusty Centre at Kempsey in June and the Buffalo Farm at Eungai Creek. These social occasions were well received by those attending.
The shed was flooded on the evening of 29th August when the drains apparently blocked and could not cope with the volume of water. The council was asked to investigate and after viewing the drainage, they will take action to improve the drainage.
Ray Meyer was very active in producing the monthly newsletter and other IT functions and thanks go to Ray. Unfortunately, Ray has resigned from the Management Committee and shed membership, to concentrate on personal issues and we wish Ray well for the future.
Regrettably John Gregory resigned from the treasurer’s position in September after many years in that position and had made a tremendous contribution to the Coffs Harbour Men’s Shed during his term. On behalf of the members, I would like to thank John for his service. Also Bob White retiring from the secretary’s position.
Clive Longstaff has stepped up into the treasurer’s position with the assistance of Ken Howe.
Last but not least, our shed managers, Robert Houston and David Churchyard deserve a huge pat on the back from all members. Theirs’s is a very unenviable job and they are the first point of call for community members seeking help etc from the shed. There is also a large admin component dealing with the ordering and finances which keep the shed viable. Thanks to Robert and David. In May 2019 Robert was awarded life membership of the shed for his dedication and long service to the running of the shed.

The AGM was held on 11th December and was well attended by 32 members being present.

The minutes are available on request from the Secretary Tony Winter.

The Management Committee for the next 12 months was elected as follows:- 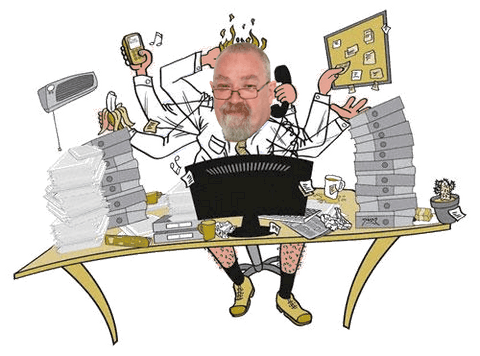 All going well this month, busy little bee's getting as  many jobs out before Crimbo as we can, the guys have done well to get as many done as they did. David Churchyard still missing action after his surgery on his leg, coming good though, expects to be back end of January.

Job intake is still good and we have work till March at least. The AGM and Crimbo Party went well with 2 new members fronting up for the committee, Ken's report should have the details. The party went well with a good attendance with partners enjoying the Bowling at the 300 club. The Coffs hotel had a decent meal for us after Bowling.

All the best to the members for the Christmas Holidays and  good new year for 2020, hoping you get what you wish for.

And to the members unwell at this time, get well soon, we miss you at the shed, Baz (Hang in their mate), Ray, Clive and David, speedy recovery.

Photos of the birds we made for the overwinter project, run by the council and regional gallery. 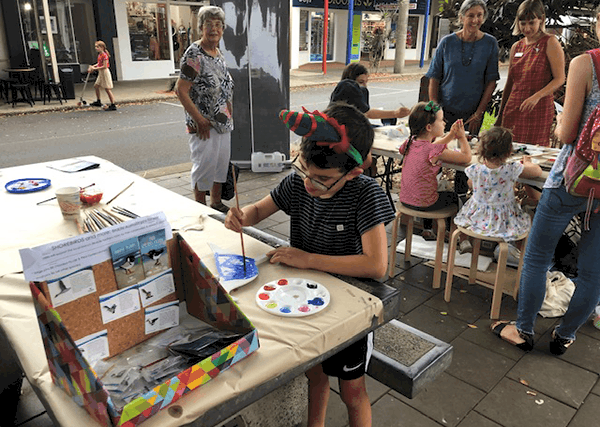 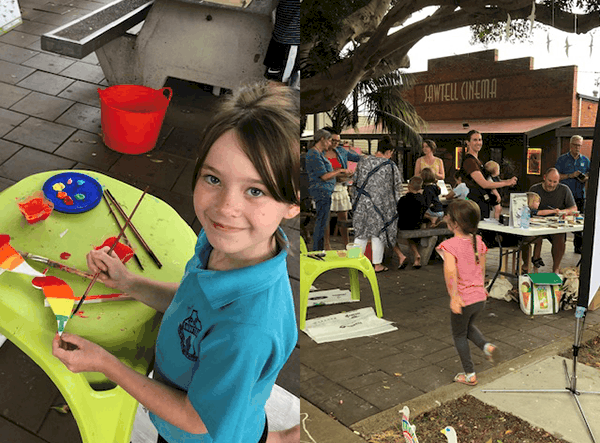 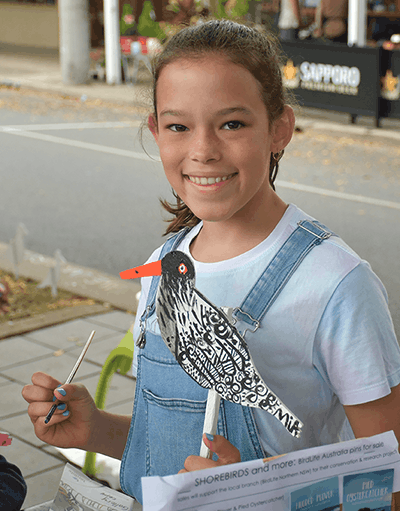 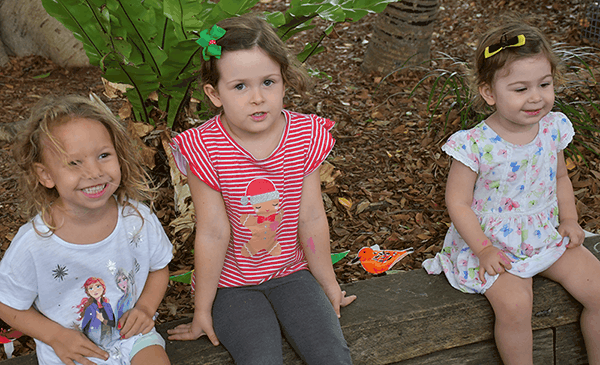 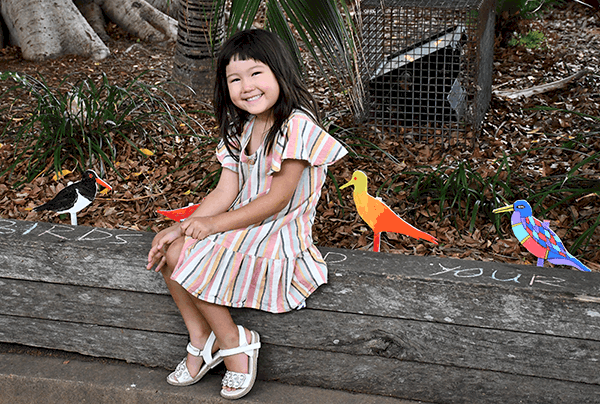 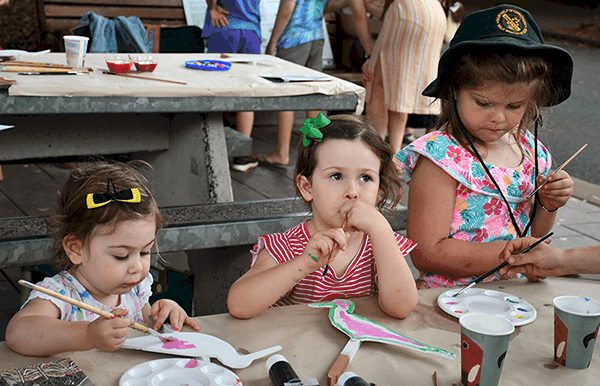 Members spent a fews hours bowling at the local Bowl 300 Club, prior to an evening meal at the Coffs Harbour Hotel. Photos show how members and their partners enjoyed some relaxing time socialising.

(Editors note: I have always enjoyed smacking some balls into inanimate objects while enjoying a beer) 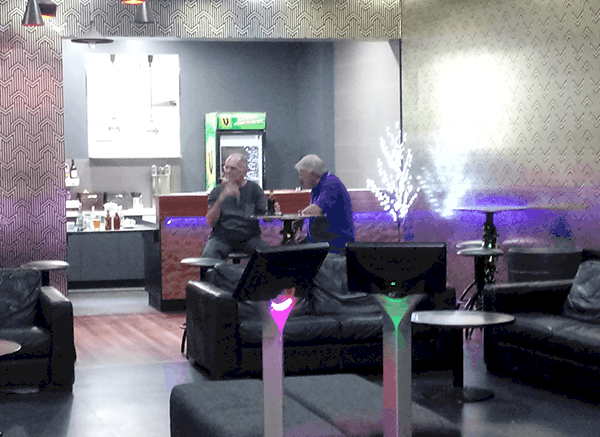 Neville and Peter enjoy a quiet drink before the mob arrives 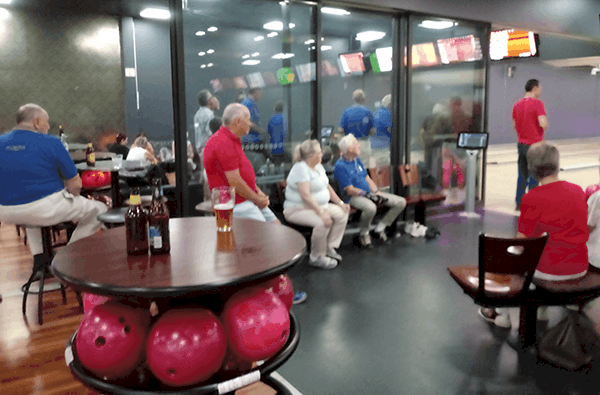 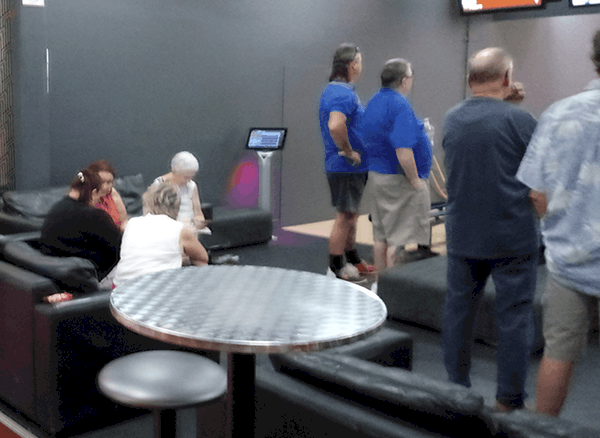 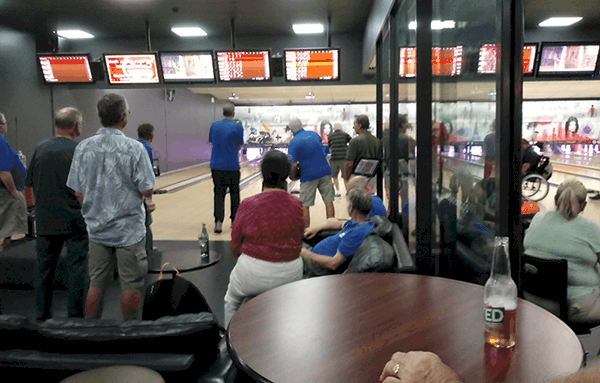 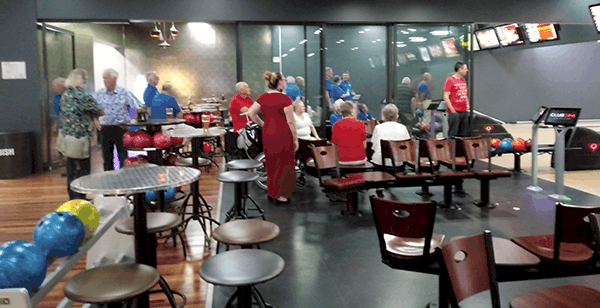 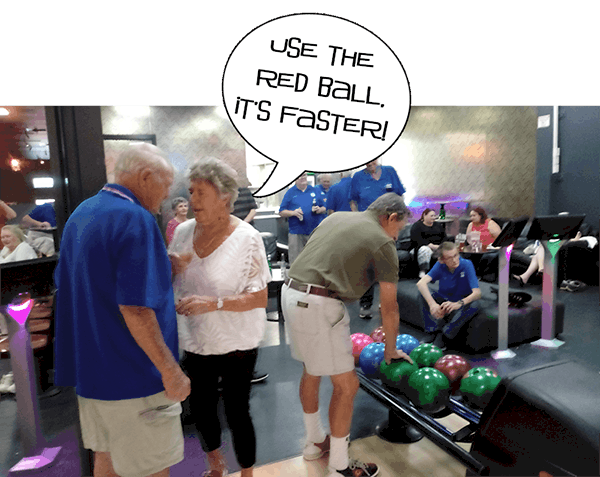 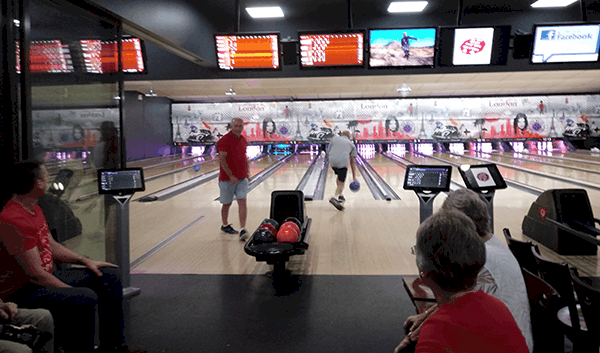 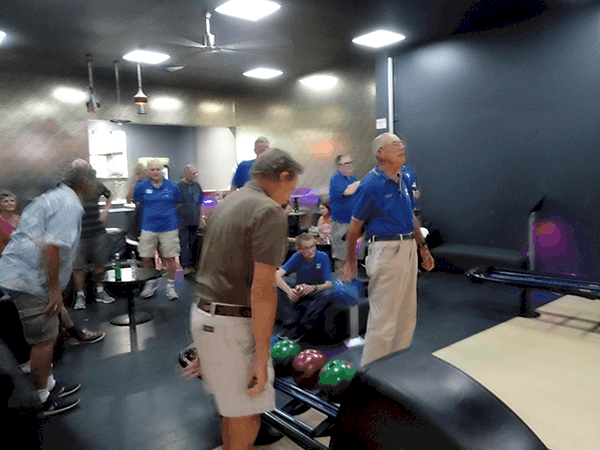 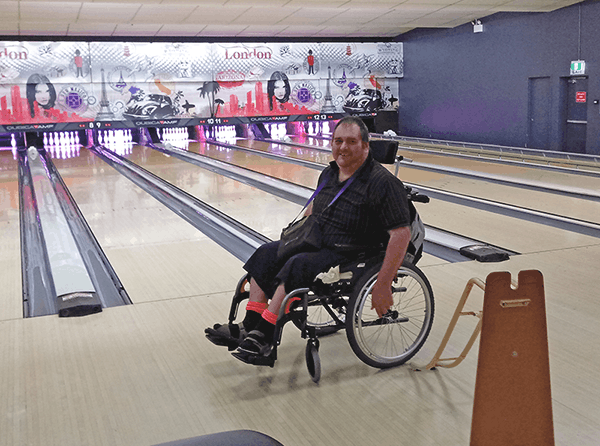 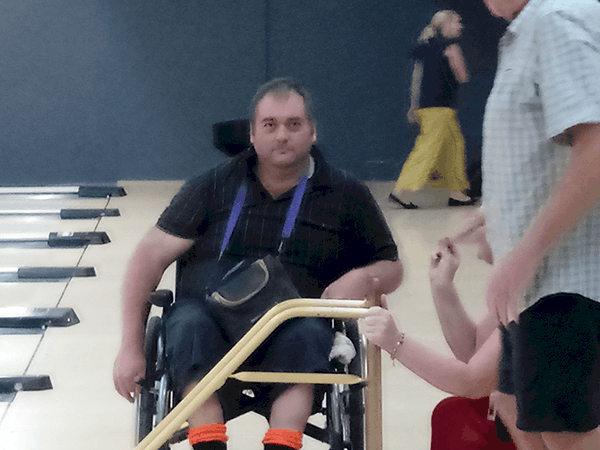 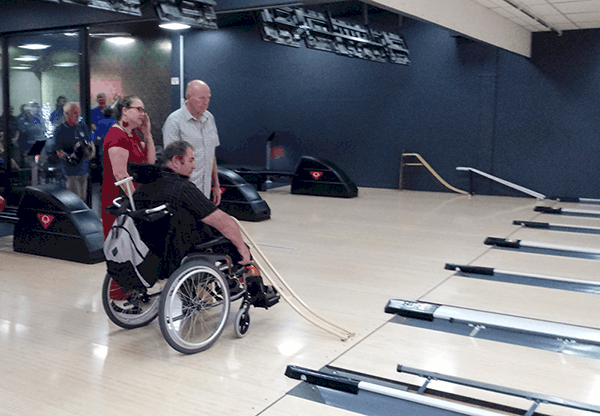 And the winner is?

New President for 2020 Tom picks the winner of the Rocking Horse raffle, which was run throughout 2019. 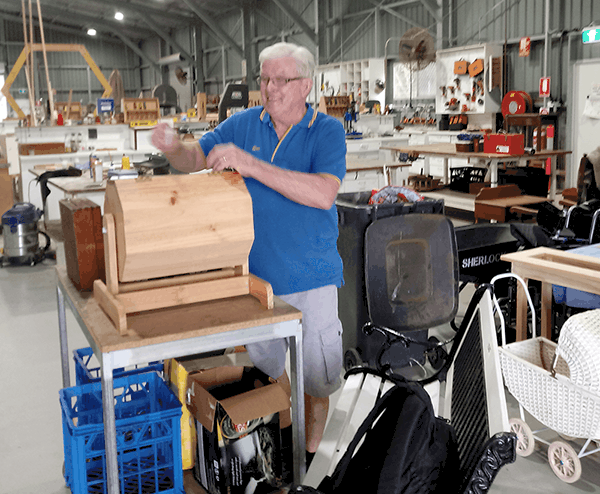 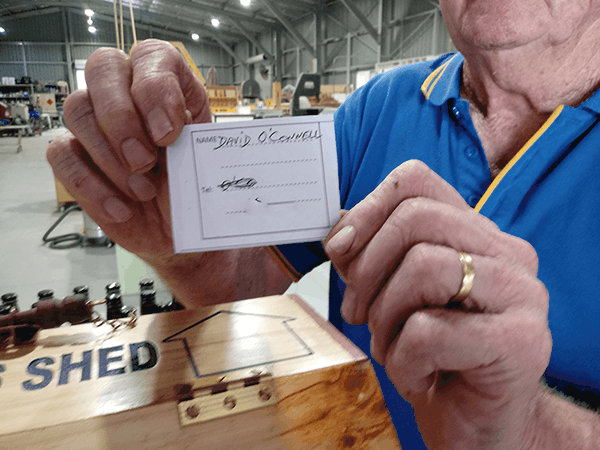 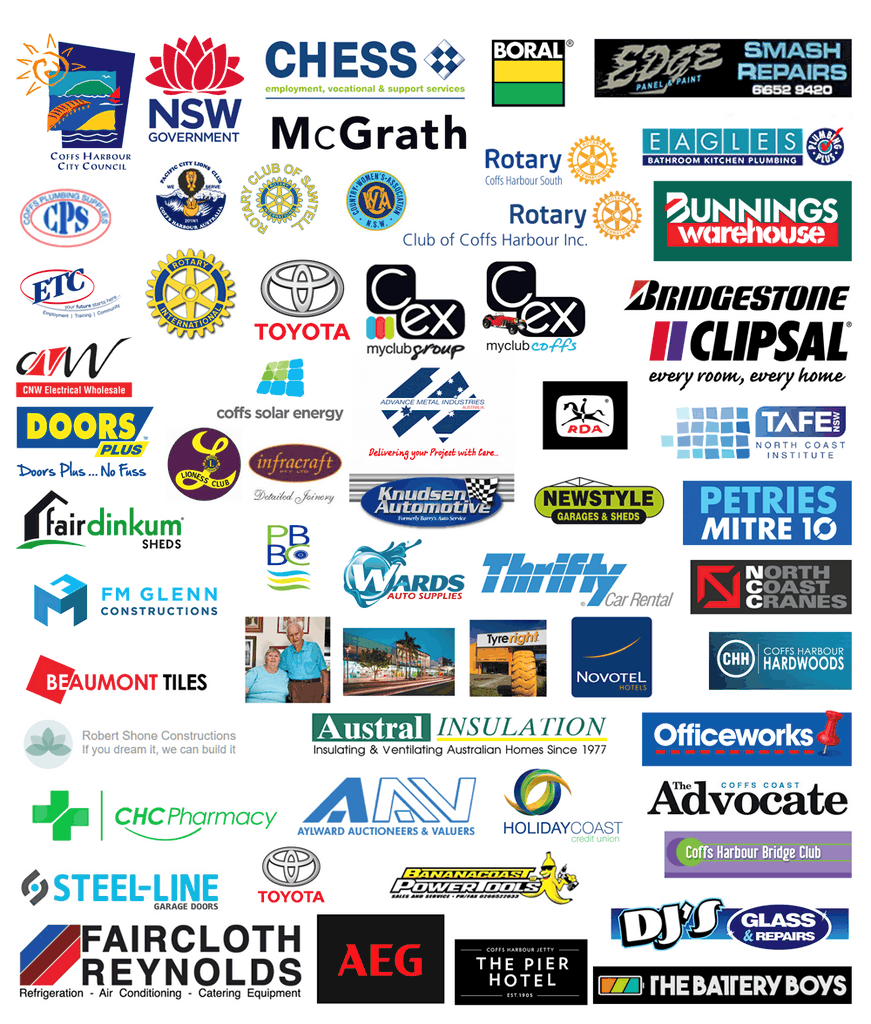