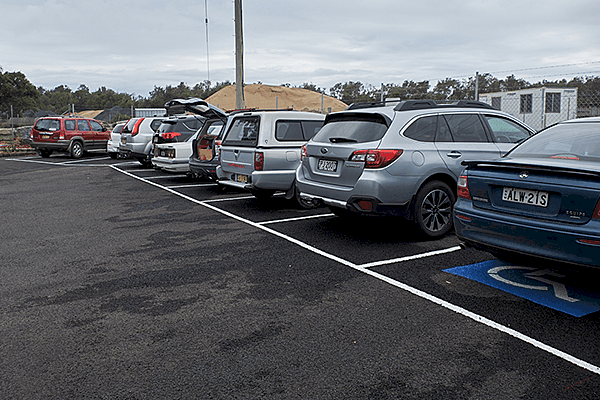 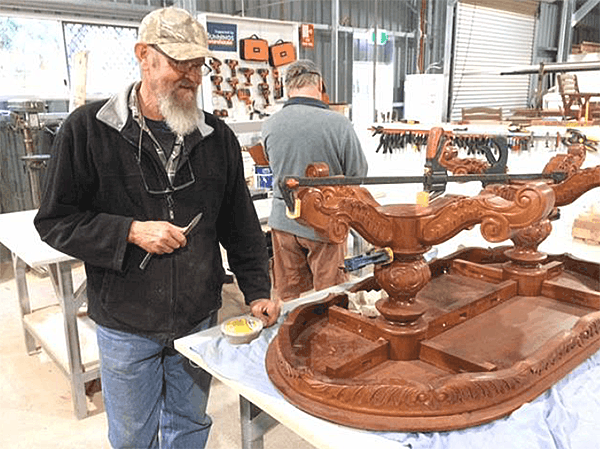 Adrian Craig has refitted the legs of this table.
Commmission job.
Nice work, but not my cuppa. 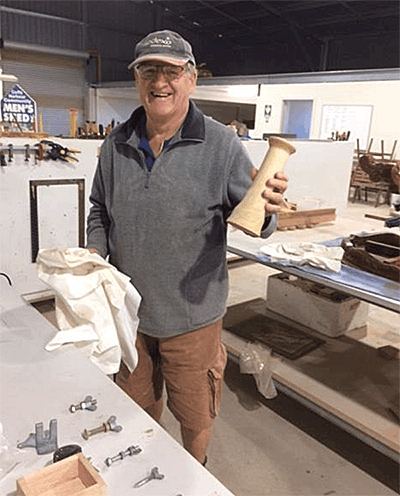 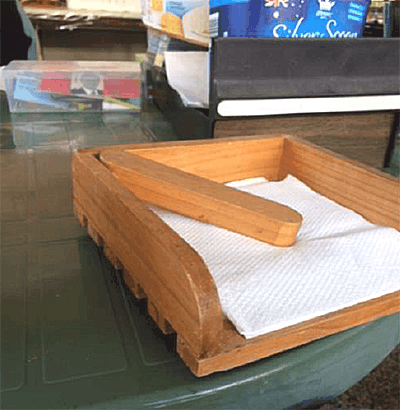 Saw this design for a serviette holder recently.
The arm pivots on a 6mm dowell. Anyone could make it. 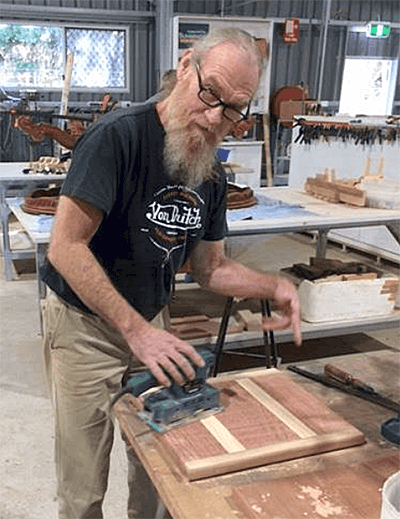 Graham Evelyn finishes a cutting board.
One of the outstanding workers during our relocation. 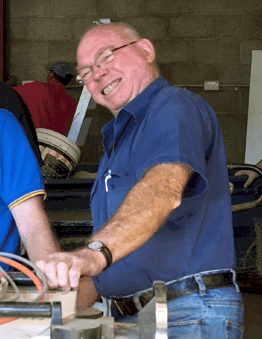 Bob White, born October 1943 in Sydney and raised there. I left school at 15 with the Intermediate Certificate in 1958 and commenced work with the old PMG, now Telstra, as a telephone technician. I mainly worked around the Glebe area and Sydney University. In 1963 I transferred to Canberra and then back to Sydney when my father died. I worked in the Sydenham telephone workshops but very quickly became bored.
A change of life then ensued when I joined the NSW Police Force in 1965. As luck would have it, I was sent to Glebe Police Station, knowing the area well was a great help. Shortly after commencing duty there, I attended my first murder, over the next couple of years I attended several murders, including the horrific abduction and mutilation murder of 3 year old Simon Brooks, Taken from the front yard of his parent’s home one afternoon and we found him stuffed into a storm water drain the next morning, unfortunately no person was ever arrested and charged over the matter. The chief suspect only died recently, but insufficient evidence was found to charge him.
My sport for some time had been shooting, using rifles and pistols. I joined the Police Pistol Club and represented the NSW Police at shoots around Australia. It also meant that I was involved in the selection of a new sidearm for Police, the Smith & Wesson .38 special revolver. This weapon replaced a total dog’s breakfast of pistols that Police had been armed with. At a later time I became involved with Specials Weapons and Operations and took part in a number of sieges.
Whilst at Glebe, I met a young nurse at RPA Hospital. This happened over a dead body I had found in a park. I asked her out and 50 years later still going strong.
In 1969 I trained as an operator with the Breath analysis section and worked all over Sydney. Late in 1969, 2 weeks after our marriage, I transferred to Tamworth to introduce the breathalyser to the northwest of the state. This meant covering an area that stretched from Murrurundi to Tenterfield, out to Mungindi, Yetman, down to Moree, Gunnedah and Quirindi. A big area for two Police to cover with many weekends away. It also involved a lot of public speaking, mainly to service clubs, whose members were trying to find a way to beat the breathalyser. There is no way.
After two children, I transferred back to uniform and was posted to position of Lockup Keeper at Inverell in 1974. In 1978 I transferred back to Sydney, to Liverpool, where I undertook Police Rescue training, and attended many serious and fatal road accidents and industrial accidents in the southwest of Sydney.
In 1980 I transferred to the NSW Police Academy at Redfern where I was involved with training new recruits. That year I was promoted to Sergeant. One of the things that new recruits were required to do was to become blood donors and a note from their mum would not get them out of it. All instructors, who were all old hands at donating blood always, went first to show the youngsters that it did not hurt. In April I was unable to give blood and a blood sample was taken. The next morning I received a call from the Red Cross asking me to see haematologist at RPA Hospital, where I was informed that I had a very rare type of Leukaemia for which there was no treatment and that I only had 3-4 years left. The doctor’s would be able to give a better forecast when I had my spleen removed. That would be the half way point. I retired from the Police and we returned to Inverell to live, as that was better than my wife bringing up two children alone in Sydney, Twenty months after diagnosis I had my spleen removed and that meant another 20 months. Twelve months into that I told that a treatment was being tried in America, with some success, I was offered the chance to take part in a trial in Australia. This was partially successful and I used the treatment for some time until 1998 when it just stopped working. At this point I was informed that another treatment was now available. This proved successful.
In 1996, we decided to move to Coffs Harbour by way of Dorrigo where I became involved with the SES as the Unit Controller, because of my Police Rescue experience. In 1998 we arrived in Coffs Harbour and I transferred to the SES Unit here. I acted as Deputy Unit Controller and then Local Controller with both Coffs Harbour and Corindi units with some 90 personnel under my control. In that time we experienced road fatalities, mini cyclones, storms, airport emergencies and assisted Police many times with evidence searches, mainly related to murders.
In 2013 at the age of 70, I retired from the SES, went on a bit of a trip overseas and then joined the Men’s Shed. All through my working life, wood work had been my hobby and all though not that great, I have learned so much at the Shed, it was a move well worthwhile.