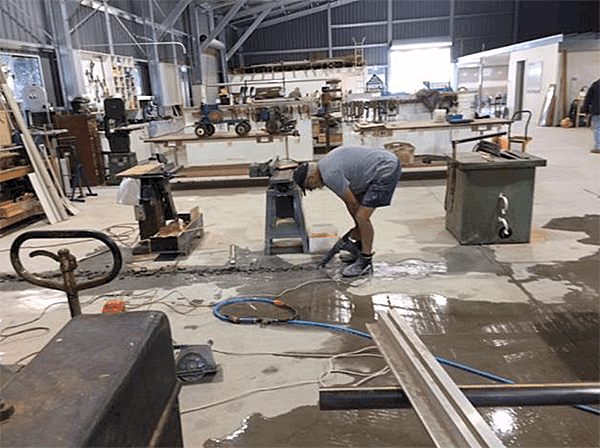 We have taken in many work orders lately for commission jobs. Volunteers are needed to manage each order. Perhaps you could be in partnership or in a team to help with the backlog. I like the listings shown on the whiteboard near the first aid room. All stray tools and materials can now be grouped and stored. See Tom.

Now that power is available, we notice them being used by learners and serious turners. 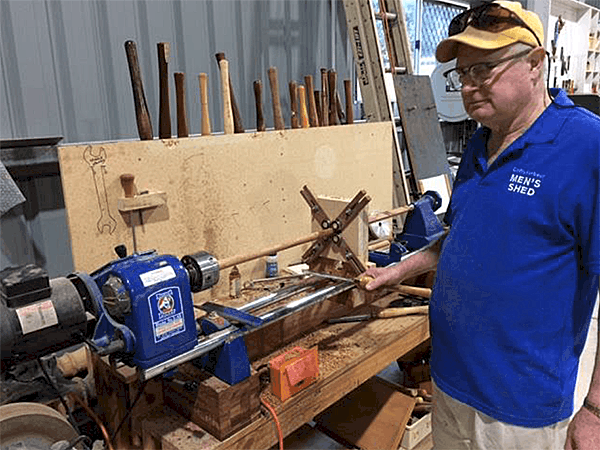 David Wickham showing his understanding of the Record lathe using a steady rest to make a walking stick. 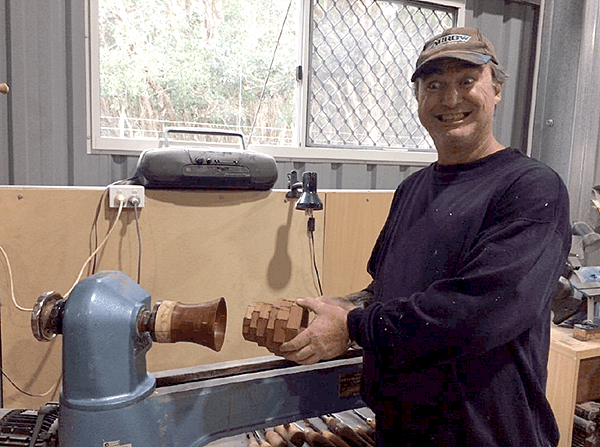 Scotty seems pleased with his segmented goblet.
Note before and after. 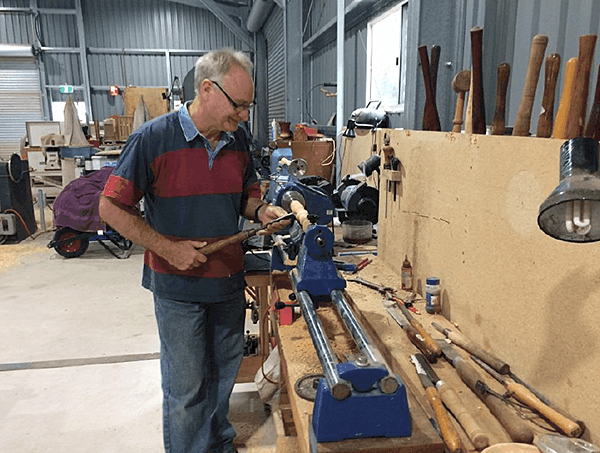 Tony Winter’s first try at a lathe. A pleasure to teach the teacher.
Also noticed our resident plasterer Bruce McConnell trying it out.

I’m using my Editor’s right to winge about smoking in or close to the shed. As much as I enjoy being with you all, I am concerned that myself and others are put off by inhaling the smoke of others. We have always had a transient population of members, but I suspect that we are losing good members partly because they don’t like smoke. Call me precious, I know there is nothing worse than a reformed smoker ( me) Sorry, but I have had some sad memories of departed friends/relatives. It’s illegal and anti social in most places now, so please do the right thing in OUR shed.

We are grateful for the $3000 donation of AEG power tools to the shed via Bunnings and AEG. They are the most advanced portable tools available with great features. Also donated were marking out tools to replace depleted and inaccurate items. 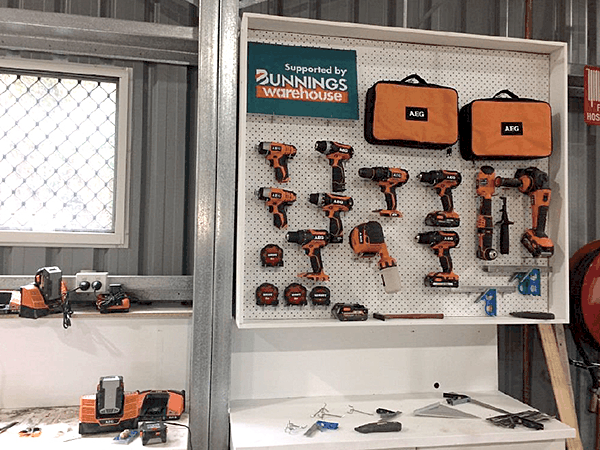 Now wall mounted, we hope that these will always be accessible through careful racking.

We now have a compost bin outside for food scraps. Please separate your plastic wrapping and use the green bucket and compost bin as at home. A few spades of dirt on the compost should encourage the worms.

We welcome the following new members, some of whom have been extremely valuable already in the shed relocation. 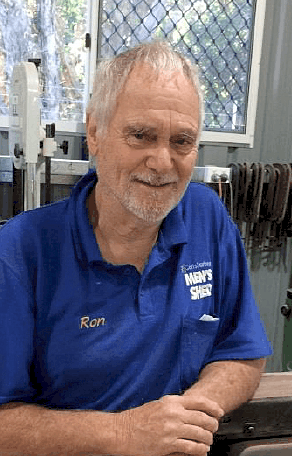 I was born on the 25th October, 1949, the first born of twin boys. We were born on our fathers birthday at the Mater Misercordia Hospital at Crows Nest, Sydney.

We lived at Summer Hill, my father was a barber and worked at Newtown, and my first school was at Kegworth kindergarten at Leichhardt. I distinctly remember the fruit and vege man coming around, the milkman, the butcher and most importantly, the iceman who came weekly with a big block of ice for the refrigerator. The meat safe hung from the ceiling.

We then moved to the western suburbs and my father bought a business and reidence from his father in the main street at Chester Hill. It was a barber shop, the residence was upstairs. Dad employed two other barbers, he sold a large assortment of sporting equipment, cigarettes and tobacco, and most importantly Matchbox toys. Just about every mother and father bought their child a matchbox toy after having their haircut. I can just recall that adult haircuts were 4 shillings, a child was 3 shillings and the matchbox toys were one and threepence. He also sold men’s grooming products, deodorants and toothpaste and brushes, and who could not forget Spruso, Brylcream and Score hair creams.

I attended Chester Hill Public School, and then to Sefton Co-ed Secondary School. There were two celebrities at Sefton High when I was there, Stevie Wright (he was a year in front) and then Terry Lamb. I can remember completing my last exam paper to receive the Intermediate Certificate. It was about 11.30am in the morning, (November 1964) and about one hour later I was delivering telegrams on a pushbike for (the then) PMG. I was earning about 15 pounds per fortnight. I finished up at Christmas eve.

In January 1965, cashed up with over 30 pounds, I had one hell of a holiday. February 1965, I commenced a 5 year apprenticeship as a Stereotyper with Australian Consolidated Press, better known as the Daily Telegraph. Sir Frank Packer was my first boss, he signed my Indenture. The last 6 months of my apprenticeship had to be done on nightshift. This suited me right down to the ground, all the free time during the day, plus 17% loading. At the completion of my apprenticeship, I resigned and went to work with at The Australian newspaper, who also printed the Daily Mirror. This was great job, it was night shift, and every Saturday night off as there was no The Australian newspaper on Sundays. Frank Packer closed the doors of the Daily Telegraph (as he was sick of all the strikes) and it was bought by Murdock, the paper then became known as Mirror Telegraph. Much more modern machinery was brought in, less staff needed, last on, first off.

I was lucky to be employed by Fairfax, and started at the Sydney Morning Herald, what a great job, good money, night shift and a great boss. I resigned from Fairfax in 1972 and I moved to the Central Coast, my father and I built a house at Budgewoi. I obtained a job in a small printing factory near Wyong. In 1974 I left the Central Coast and returned to Sydney. I joined the NSW Public Service and started at the Government Printing Office in my old trade as a Stereoyper. I was also working part time as a drink steward at North Sydney Leagues Club (once a Bear, always a Bear).

I was transferred to Coffs Harbour in November, 1984, and Marion and I bought a 13 acre hobby farm at Raleigh. In 1993, the office was upgraded, I was then promoted to Officer in Charge, Senior Sergeant. 1998 was not a good year, a lot of things went on, and I lost both parents to brain tumours. Christmas that year was when the black dog moved in, I was off work for 4-5 months. A couple of months later after my return, I was transferred as the Relieving Sheriff's Officer, New England Region. I spent over two years relieving at centres located at Port Macquarie, Tamworth, Inverell, Grafton, Lismore and Murwillumbah. I then had a Court Case with the Department, I had a further 10 months off on sick leave, I was then given a Medical Discharge from the Department in 2001 through Health Quest. I was only 51.

In 2002 I sold the property at Raleigh and moved to Middle Boambee, where I still reside. I obtained a Private Inquiry Agents Licence, where I could do Private Inquiry work, do repossessions for Finance Companies and serve Court documents. I only did the latter. As I had an ABN, I did a lot of work for a Building Assessor. The main duty was removing damaged garden sheds and replace with new ones, also removing storm damaged household contents.

I was also making wooden items at home, such as dog kennels, Jack and Jill chairs and small ornamental garden wheel barrows. In 2012/2013 I had another visit from the black dog, Doctors and Psychologists followed. I can recall walking down towards the entrance of the Mens Shed in Marcia Street, on about 4 or 5 occasions. I got to about 5 to 6 feet from the door and turned and walked away. I had to get out and about.

About 4 years ago I obtained an Authority to drive taxi cabs, I do one or two shifts a week. Not long after that, I joined the Mens Shed. After nearly 5 years of taking whacked in the head tablets, I have now weaned off them. 2015 and 2016 saw Marion and I do 6 ocean cruises, plus I went with a mate to Vietnam and Cambodia last October. I thoroughly enjoy my time at the Shed, the help and the advice that I get when I am doing jobs, the camaraderie, the joking etc. Love the new shed.