Steel cabinets have been installed beside the spray booth.
Our thanks to McCombie Assoc. (Psych) for their donation. 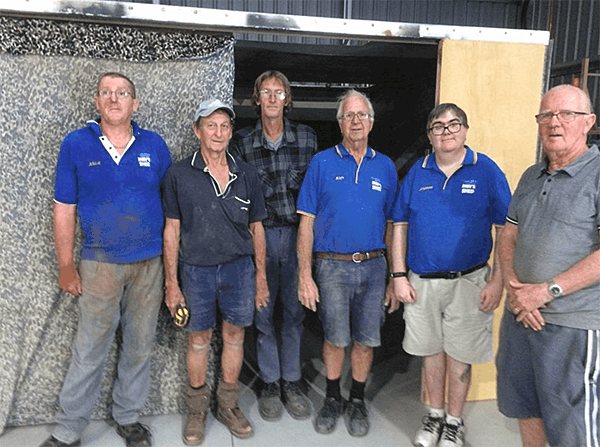 The Erection Crew, with their spray booth.
It has been decided to duct the exhaust vertically.

Tom at work in the booth, French Polishing, dreaming of spraying. 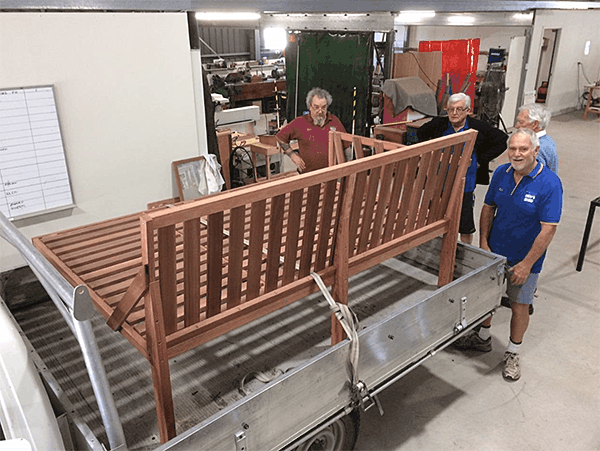 Arguably one of the neatest commission jobs from the shed lately this divan / bed is ready for delivery. 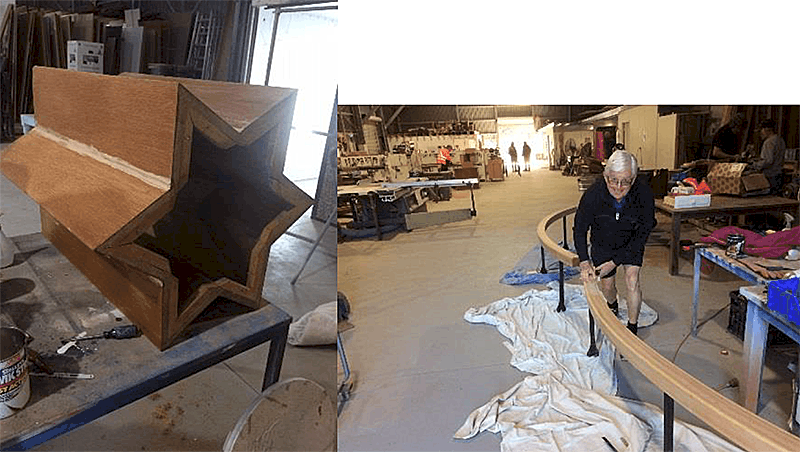 In the spiritual mode, we have been assigned to produce and restore a baptismal font and communion rails as shown.

A successful garage sale was held on Sept. 9th with about $1000 being raised. A follow up sale will be held in conjunction with Shed Open Day on Sat 30th.

The following new members have arrived since the new financial year started:

Most of the above have no email address recorded on the shed database.
It would help with communications if you could register it (legibly written) with the shed manager. Thanks.
Current members are always willing to help out newcomers if asked. There are only a few cranky old men! Easily identified! 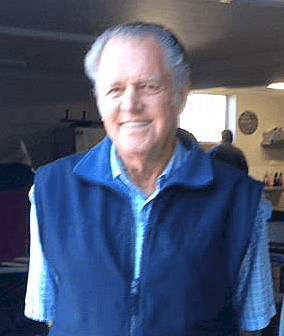 I was born at Kyogle, Northern New South Wales, in March, 1939. My father was a carpenter and, with my mother and 3 siblings, lived at Horseshoe Creek, a small rural area 20 kilometres north of Kyogle. My Primary education was at the small district school there. We moved to Kyogle where my secondary education was completed at the Intermediate High school there.

I undertook an electrical apprenticeship with a local electrician in 1956, attending technical college at Lismore. Following the sudden death of my employer in 1958, my apprenticeship was taken over by the Northern Rivers County Council. After graduating successfully, NRCC offered me a position as an Electrical Mechanic in Kyogle, which I undertook.

I became interested in “all things wood” and purchased an A.E.Herbert workbench(Saw, Planer and Lathe, combination) which I still have.

I met local beauty, Jan Spence, in 1959, and we were married in February, 1961 in Kyogle. 18 months later, with our first daughter 6 months old, I transferred to Bonalbo as the Area Service Mechanic covering Mallanganee, Drake, Tabulam, Bonalbo, Urbenville and Woodenbong to the Queensland Border, on call 24 hours a day with only one 3 day weekend a month off. We had a house which went with the position so we thought we had struck the jackpot!!!

The years there were challenging – no 2 way radios or mobile phones in those days. During widespread storms, while I was out restoring power, Jan would receive further complaints and I would have to ring back to her periodically from the homes of consumers, (some of whom would give me meals) to take these calls and carry on sometimes for quite a few hours before returning home.

After only 3 months in Bonalbo, it was discovered that I had contracted Tuberculosis. I was hospitalised for the next 6 months, spent 7 months in recovery, then resumed my position in Bonalbo, where we remained for 18 years with our family increased to 4.

With our children reaching the age when they would have to leave Bonalbo to find employment or further their education, I applied for a position as an Installation Inspector in Coffs Harbour. Suddenly, my weekends were free, and I started my woodturning more seriously. I joined the Mid North Coast Woodworking club, received tuition from Neil Scobie & bought one of his designed lathes, then my persistence in turning resulted in exhibitions and selling items at various outlets.

I took a voluntary redundancy from Northern Rivers Electricity in 1996.

In 1998, after having several holidays around Australia, I was contacted by Coffs Harbour Blinds & Awnings to see if I would be interested in designing and manufacturing western red cedar shutters, which I did on my own, for approximately 10 years. As orders became more than I could handle, factory made orders were imported. I am still employed part time assembling venetian blinds.

We have caravanned and had holidays in most parts of Australia – and for the first time in 56 years do not own a caravan and live very contentedly in Coffs Harbour, being involved in a number of organisations, having a loving family, including 12 beautiful grandchildren and loyal friends. 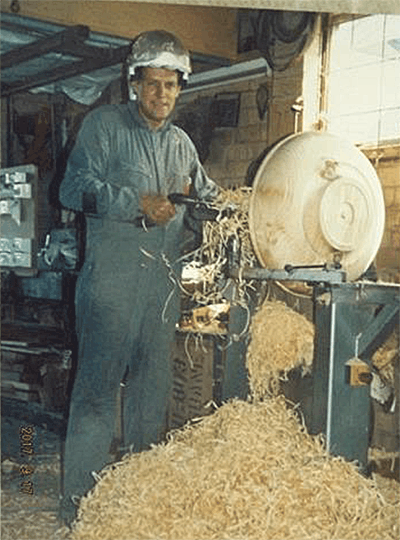